Ticks can be found year-round but are most prevalent in the warm summer months. They are parasites, and as a result, are on a continual quest for a host. If a host is not available, a tick can survive up to a year without feeding. A female tick must have a blood meal before she can lay eggs. After feeding, she drops off her host and lays thousands of eggs. A female tick lays one batch of eggs, after which she dies. A male tick also dies after reproducing. 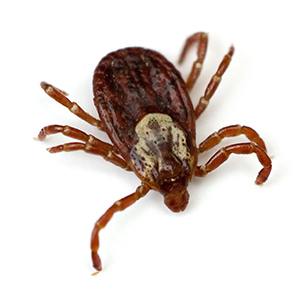 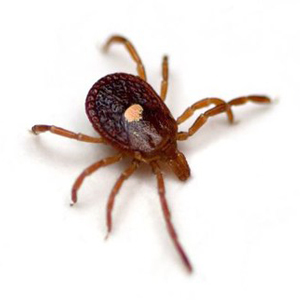 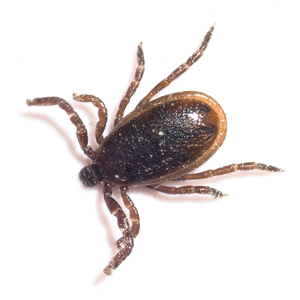 Ticks are ectoparasites, living by feeding on the blood of mammals, birds, and sometimes reptiles and amphibians.

Lyme disease is transmitted via the bite of infected ticks, which attach to any part of the body, but often to moist or hairy areas such as the groin, armpits, and scalp.

While everyone is susceptible to tick bites, campers, hikers, and people who work in gardens and other leafy outdoor venues are at the greatest risk of tick bites. As many a suburban gardener can attest, with the expansion of the suburbs and a push to conserve wooded areas, deer and mice populations are thriving, too, providing ample blood meals for ticks. For lyme disease to be transmitted, a tick needs to feed on the host for 24-48 hours.

Symptoms of early-stage Lyme disease include:

Another common symptom of Lyme disease is a rash (referred to as “Erythema migrans”). As many as 80% of infected people may develop a rash, and roughly 20% of the time the rash has a characteristic “bull’s-eye” appearance.

When left untreated, infection can spread to joints, the heart, and the nervous system.

Later-stage symptoms may not appear until weeks or months after a tick bite occurs. They include:

Permanent damage to the joints or the nervous system can develop in patients with late Lyme disease. It is rarely, if ever, fatal.

Also known as the wood tick, the American dog tick gets its name from the fact that adult ticks prefer to feed on domestic dogs, coupled with the tick species being found only in North America. The American dog tick is a member of the hard tick family, meaning that it possesses a hard exterior shield. American dog ticks are known to harbor bacteria responsible for causing diseases in humans such as Rocky Mountain spotted fever, which is spread when they suck blood from their host. Exposure to these ticks is most likely to occur during spring and early summer.

The brown dog tick is named for its color and because it is found on domestic dogs. Although it is unusual for a brown dog tick to bite humans, it will do so in the absence of a canine host. If bitten, the dog tick must be removed as soon as possible.

The lone star tick gets its name from the single silvery-white spot located on the female’s back. These ticks attack humans more frequently than any other tick species in the eastern and southeastern states. Lone star tick bites will occasionally result in a circular rash, and they can transmit diseases. It is essential that lone star tick removal start immediately.

A notorious biting arachnid, the blacklegged tick is named for its dark legs, which are in contrast to its pale body. Blacklegged ticks are sometimes called deer ticks, as they frequently feed on deer. However, deer ticks have also been known to bite humans.